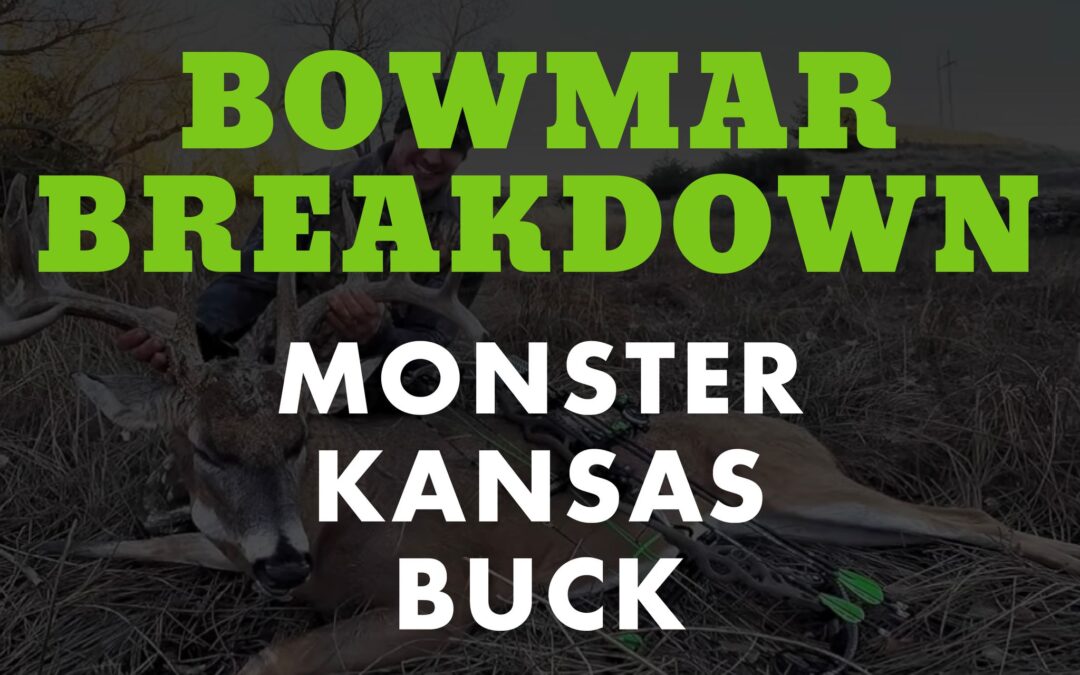 We recently started a new series called “The Bowmar Breakdown” where we break down our most iconic bow hunts. This week I am breaking down the biggest buck I have ever shot in Kansas. I tell the story on the Bowmar Bowhunting YouTube channel as well, so feel free to follow along!

I killed this buck back in 2017, which was a really rough year for me. We lost a lot of our hunting properties due to new developments and selling of land. I was relying on Kansas that year, and in years past, Kansas has NOT been good to us. We’ve hunted quite a bit there and have never had good luck.

We went down there and set up a bunch of cameras early in October, just trying to find a big, mature buck. We didn’t find a lot! Towards the end of October, I went down and made a bunch of scrapes and we hung up new cameras. We finally got a GIANT on camera and I couldn’t believe it. At this point, I hadn’t killed a 200 inch deer so this was a dream deer for me! Not only was he giant, he was really old!

At the time, we were living in Ohio. We would only get to hunt four or five days at a time. On this Kansas trip, I did use an outfitter, but it wasn’t that typical “client to outfitter” relationship. I don’t like having the outfitter do all the work for me. I asked for exclusive access to one of their properties, so we picked out this farm. I did all the work and set up all the cameras.

Once we got him on camera, he wasn’t very consistent, and he was totally nocturnal. Deer of this caliber tend to be that way. We had to be creative when hunting him. We brushed in a blind right in front of the scrapes I got pictures of him hitting.

We saw a cold-front was about to hit Kansas. It was the perfect time to hunt this giant. At this point, he hadn’t been showing up in daylight at all, but it was November 9th and a cold front had just moved through, so I had a really good feeling about this hunt.

The setup of this spot is really cool because there is a big river system that runs right through the middle of this river bottom. There was a good crossing that the farmer had made for his tractor. This crossing was actually a hotspot for bucks because the bedding area was on the other side. So if a buck wanted to get on the downside of a bedding area, he would have to cross this bridge.

On November 9th, it was literally the perfect setup! We got into the blind super early, and didn’t see a single deer at first. I was shocked; I thought I screwed something up. It turns out, the deer were still in the fields feeding late into the morning, and we were off the field a little ways. At 9AM it was like a light switched flipped on. It was one of the most epic mornings I have ever had in the woods. Buck after buck started showing up, and it began to get really hard to not pass up these bucks.

As the morning turned into afternoon, we were seeing fewer and fewer bucks. We were debating on whether or not we should leave and go get food. But, we decided to sit all day. I didn’t want to take the risk of missing this buck. Thank goodness we did!

At 1PM we had deer in front of us, and I looked to my right and there he was, standing at 48 yards. I began to get all nervous; it was going to happen! The craziest thing happened, all the doe walked right to him so he never walked in front of us. Then, the deer left.

We waited from 1-4 without seeing much at all, then the light switch turned back on. Deer began pouring out again. Right on the other side of the river, a monster buck came out and was walking straight towards the crossing. I couldn’t believe it. He circled the field, then turned and walked right in front of me. That was the moment I knew he was going to come into 30 yards and I would get a chance.

I went full draw, but I was in such an awkward position. I shot this before the Bowmar nose button was made, so I didn’t anchor correctly. I shot him further back then I would have liked. I played it off in the video as if I wasn’t too worried about it, but I was freaking out. There was a moment that I looked out, and I could still see him. Come to find out, my arrow went through the top back of both of his lungs.

He tipped over right in front of me at 30 yards. My heart exploded. This was the highlight of my 2017 season. To put my hands on this giant buck was unbelievable.

I hope you enjoyed this Bowmar Breakdown – thanks for reading!