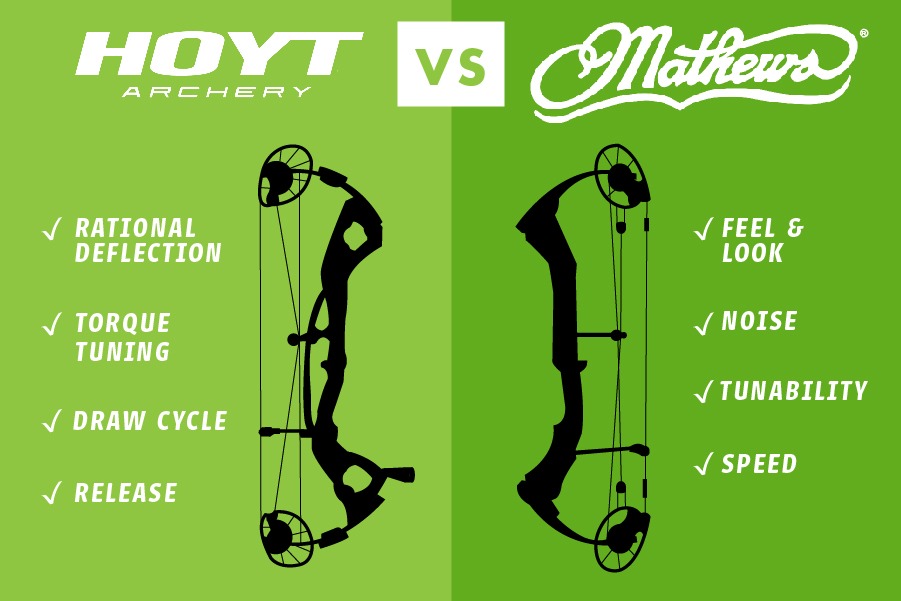 This is the review everybody has been waiting for. I am comparing a Hoyt bow to a Mathews bow. In order for me to give you a true, detailed review, I needed to shoot both bows consistently for a great period of time. I put it through the “Josh Bowmar” test, and tested 12 different factors that I find important when choosing which bow to purchase. Let’s get started with my official Bowmar Bowhunting review!

In my opinion, both of these bows look really cool! I didn’t prefer one over the other, it’s more personal preference. Mathews and Hoyt tied.

These two bows have two totally different styles of tunability. I explain this in my Youtube video you can find over on the Bowmar Bowhunting page.  When it came to out-of-the-box tuning, I was only within a couple clicks of shooting a perfect arrow with the Mathews.

Spine sensitivity is the bow’s ability to shoot a wide variety of arrow spines and still get in tune – this is important to me! The Hoyt has very low spine sensitivity. I had to find the exact spine. With the Mathews, I was able to tune three different spines. Mathews dominated this category!

The Mathews bow, again, dominated this category. I had zero elbow pain and it was really smooth. With the Hoyt, I had a lot more vibration and could feel it more in my elbow.

I determined which bow was the easiest to draw. The Hoyt has the smoothest and best draw cycle out of every bow I have ever shot. This is important when trying to up your poundage. The Mathews draw cycle was just a little more aggressive.

I was super surprised with my findings here. Mathews was SIGNIFICANTLY quieter than the Hoyt. I would guess it was 25-30% quieter, which is massive.

The Mathews has an amazing back wall. There is hardly any creep and it’s very solid. The Hoyt has a very spongy back wall. For that reason, Mathews wins this category.

Creep tuning is when you creep off the back wall. I need a bow to shoot the middle when I am in a high pressure situation. Hoyt wins this category.

Torque tuning is the most important factor in the forgiveness category. This allows front hand forgiveness as a bowhunter. There is a massive difference between these two bows, and Hoyt wins this category, which was the make or break between which bow I chose.

This category analyzes whether you can shoot any release with each of these bows. The Hoyt won again. I could use any release.

As you can see, there is a lot to consider when going to the store to buy a bow. At first, Mathews was better at first glance. Once I dove into what makes a bow great, the Hoyt came out on top.

Let us here at Bowmar Bowhunting know which bow YOU think is better – Hoyt, or Mathews?