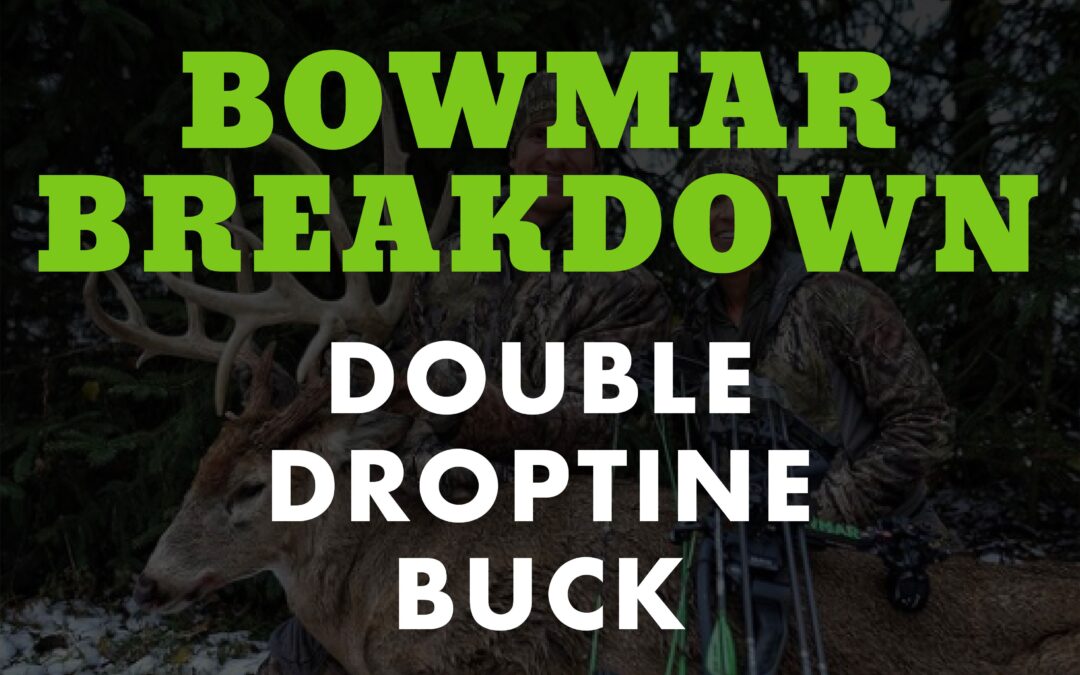 Hi guys, Josh Bowmar from Bowmar Bowhunting, here! I am so excited to introduce you to a new series called the Bowmar Breakdown where we break down our most iconic hunts.

Today I am breaking down my “Double Drop Tine” buck that I shot in Ohio back in 2014.

Here’s a little back story of this buck! Sarah and I were hunting in Kentucky and trying to get our bucks. It wasn’t the best hunting trip, but I met one of my best friends, Jimmy Smith. He was the person that told me “marriage is one of the greatest things in the whole world,” because at the time, Sarah and I were thinking about getting married. He encouraged it! He told me another interesting thing – “Josh I want you to come down and hunt with me.”He had a couple properties that he didn’t hunt, he just needed to get permission. The owner said he had two properties – he gave his employee first dibs and I pretty much got the leftover farm, which was where this deer was.

This buck had been across the street all summer eating in the bean fields, which was why the other guy picked that farm. I had corn over on my side. Funny story – the guy took one of the deer camera pictures of this deer and had it tattooed on his arm. Then, the deer disappears from him and shows up on the property I was hunting!

It was a 2.5 hour drive to this property. I was constantly driving back and forth hanging up cameras and hanging tree stands. I didn’t get this deer on camera until late October. I remember the first time I got a picture of this deer on camera. I had a cell camera, it went off, and my jaw literally hit the floor. This deer was a dream come true for me! I was elated.

My immediate thought was I need to go down there and hunt him as hard as I can, but then I came to the realization that I have to take my time and be strategic. I waited and watched. At first there were a lot of nighttime photos, but they kept getting closer and closer to daylight. I was analyzing the moon phases, the air pressure, and noticed there was a cold front that was going to come in. I thought to myself, “I bet on this day, he is going to break daylight.” I wondered if I should go hunt, but I chose not to because I didn’t want to mess it up. Sure enough, HE BROKE DAYLIGHT. He was out both morning and night.

The next morning, the cold front was still there and the wind was marginal. I got up in that stand long before daylight. It was one of those mornings that the ground was frosted over and it was super quiet – I could hear everything. It was starting to crack daylight and I heard bucks fighting. They were about 200 yards away, and I was freaking out! I was self-filming, and I looked up and there he was. He was prancing through the grass and he was just a monster. All I could see were those matching drops.

I got in position and I was ready. I thought he was going to come out in front of me at about 27 yards, but he circled downwind and came right under the tree at 14 yards. I was freaking out and thought I had to shoot him right then. I drew back when he was looking straight ahead. As I was drawing back he caught me and ran out of the camera frame. He ran off to my left and behind me. I immediately jumped off the platform and stood behind this huge wall of brush.

At this point, I couldn’t see him. I leaned way out and my safety harness was the only thing holding me up in that tree. I barely got in front of the bush and he was cornering away, almost butt to me. I tucked the shot in there and pulled the trigger. It sounded like a 2×4 hit that deer! Watch here on our Bowmar Bowhunting YouTube video to hear the shot. I knew I hit him, but the shit was a little far back. I didn’t know how I hit him.

I was freaking out. At the time, this was the biggest buck of my life! I called my dad and told him the story and he told me to give the deer some time. I gave him four hours. I called my wife, Jimmy, and all my buddies. I like to share the moment with everybody!

A couple of my buddies came with me to help track him. We started finding decent blood, but it wasn’t the easiest to follow. We came upon the number one thing you don’t want to find – a bloody bed. My heart sank.

We kept looking and right in front of the first bed was another bed, and it was covered in blood. There were four or five beds within 20 yards. Seeing all of these beds was really encouraging for me. I knew this deer had to be dead.

I looked off to my right and saw a buzzard fly up into the trees and I thought to myself, “Oh my gosh, I wonder if that’s my buck over there.” I started creeping forward and right where that buzzard was, there was a dip in the creek. I looked and I could see this patch of fur. I could tell it was a deer.

The feeling of coming upon a big buck will never get old. It was such a relief. It was awesome having all of my closest friends and family there. This deer was a lot bigger than we thought – he officially scored 178!

This was the biggest deer of my life and I am so thankful for that experience!