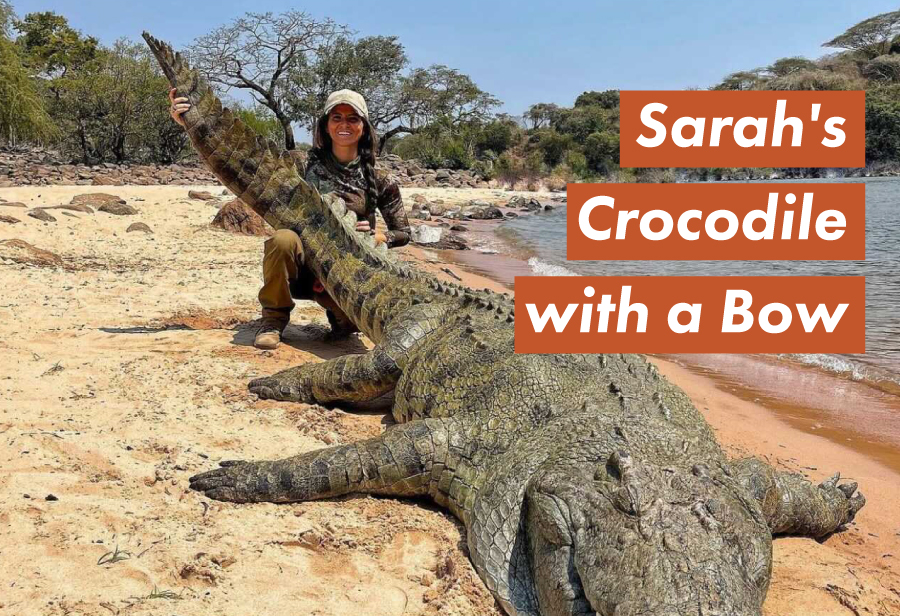 We are back with our African safari posts. This time, Sarah had some luck! She shot a WORLD RECORD crocodile with her bow! Sarah put in so much work getting her 60-80 year old crocodile within bow range.

In order to get a crocodile that old within range, she had to bait it, which in turn means she had to successfully harvest some other animals with her bow first. Luckily, that didn’t take long! Sarah and her guides scouted multiple spots and set up multiple cameras. They spotted two absolute studs, but we knew one of them in particular was special because it was a MONSTER.

Sarah put all her effort into this giant man eating dinosaur. They set out bait and built a blind out of palm leaves and grass. This croc was extremely smart and though she sat there for hours, they never saw him.

By the third day, we could tell some crocs had been eating the bait, but not the big one. Late afternoon on the third day, she finally had some crocs come in and start thrashing on the bait. To her surprise, THE GIANT MONSTER CROC showed up! All the small crocs thrashing caused vibrations that must have attracted the ancient beast. He was the king of the river and was coming to claim what was rightfully his.

Little did he know, Sarah was hiding in the brush waiting for him. When he got to the bait, he was quartering her at 22 yards, with his body exposed above the water. She wanted a broadside shot, but didn’t know how long he was going to stick around, so she decided it was now or never.

Sarah was shaking, nervous, and freaking out, but she took a deep breath and calmed her shaking hands. Everything was riding on a perfect shot. She had no room for error, no follow-up errors, just one arrow and one broadhead. She drew her bow, anchored her Bowmar Archery nose button, and buried the pin right above his arm. The bow cut loose and absolutely drilled him.

We are blown away with all the effort from our whole team. This ancient beast measured in at 15.5 feet making this the largest free-ranging croc ever killed with a bow.

Keep an eye out for this YouTube video on the Bowmar Bowhunting channel!