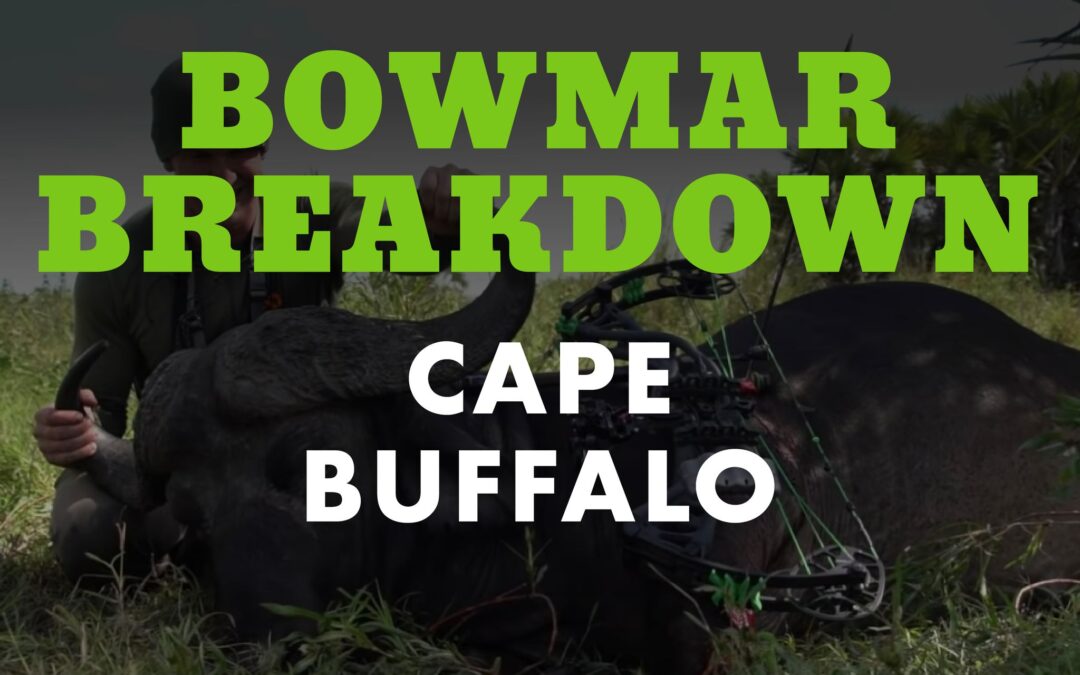 I am going to do another Bowmar Breakdown. This time, I will be breaking down my free-range cape buffalo that I shot with my bow. This is by FAR one of the top bowhunts of my life. Before I talk about the hunt itself, I want to talk about how I prepared for this hunt. We were hunting in Mozambique, which is in the middle of nowhere, so I wanted to be as prepared as possible.

You can follow along with this breakdown, and see live footage by going to our Bowmar Bowhunting YouTube channel. You can also watch the hunt here.

I started out by going to the junkyard and getting a hood off of a car. I knew if I could shoot through a hood, I probably could shoot through a cape buffalo’s rip – they’re extremely tough! I cranked my bow to 85 pounds, and tested a lot of different arrows. I ended up using a 900 grain arrow, with 275 grain inserts, and a 250 grain, 2 blade single bevel broadhead, and a four fletch system. This setup blew right through the car hood. Now, let’s dive into the hunt!

Getting into camp was incredible – we flew in on a tiny airplane with all of our equipment. As we landed the plane, I was just happy to be alive. The camp we stayed at was surprisingly nice. We stayed in these awesome stone huts. We shot our bows right away, and they were shooting great!

We drove around the entire first day and we never saw a cape buffalo. When we got back to camp, we were really worn out. The next day, we decided to hunt around camp – I ended up shooting a Nyala bull and then Sarah shot hers that day too! It was the double of a lifetime.

We were pretty far away and we could see these white birds. We walked and came up to a LARGE river. We couldn’t drive our machine across the river because it would scare the cape buffalo away. Instead, we had to walk through a crocodile infested river. Everyone was really nervous to cross this! I kid you not, right when we got to the bank, a crocodile swam behind us.

We walked through some really tall grass, and could see the buffalo grazing. We heard grass right beside us shuffling. Our guide told us that this isn’t good. We all lay on the ground and a buffalo stepped out in front of us at 15 yards. We were praying she didn’t spot us, but unfortunately, she did and so did all the other buffalo in the herd. This whole scenario is on our Bowmar Bowhunting YouTube channel. It felt like an eternity when these buffalo were staring at us. Finally, the buffalo turned and trotted away.

The next day, we went to the same area where we saw those buffalo. As luck would have it, we spotted the white birds again. The buffalo were feeding in between these two gullies, which made it the perfect situation for us to spot and stalk. We kept inching closer and working our way through the tall grass. Once we got within 50 yards, the buffalo started feeding towards us. It was game on! I had my buffalo picked out! He moved into position at 45 yards and my heart was pounding. I knew if I messed this up, it could result in serious injury or death. I had never been under so much pressure.

I went full-draw and stood up in the tall grass. I anchored my nose button (link) and anchored the pin right on his shoulder. I hit him perfect and he had no idea what happened. As soon as my arrow hit him, I sank down into the grass. The cape buffalo ran out to about 55 yards and stopped. My guide told me to get another arrow, so I cut another one loose. I put another arrow right through his heart. On the Bowmar Bowhunting channel, you can see this shot really well.

After that second shot, the buffalo ran out to about 60 yards to the herd. I had an opportunity to shoot a third time. I shot another arrow at 63 yards and it hit him perfectly, right behind the shoulder. He never even flinched. The arrow snapped like it was a twig. I grabbed a fourth arrow, drew back, and I shot him again perfectly. All the buffalo took off running. He only made it a few feet before he died. This all happened in under 90 seconds.

I was so grateful to kill such a huge beast of an animal. When you hunt in Africa, you’re not allowed to bring the meat home. This is actually one of my favorite parts because we get to donate the meat to all the locals.

Again, you can watch me break down this hunt here, and watch the entire hunt go down on the Bowmar Bowhunting YouTube channel.