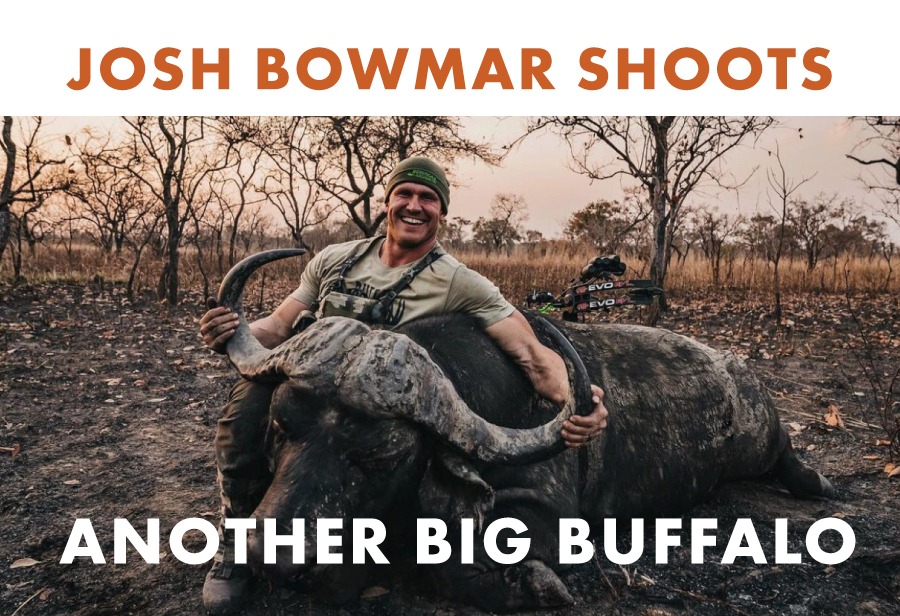 Our African safari hunts continue. I took another big buffalo down with my bow. This time I took my compound. We ran into four dagga boys (general term for an old buffalo bull) and this old beast was in the group.

We stalked into 42 yards, but the shot was extremely quartering away. I knew my 90 pound bow could get the penetration I needed so I decided to take the shot. My arrow flew perfect and smoked him mid body, burying him up to the nock. I knew I got enough penetration to get the offside lung.

We gave him 10 minutes before starting to follow due to it getting closer to evening. We didn’t want to be tracking a buffalo in the dark. To all of our surprise, we spotted him still on his feet about 400 yards away. He was in bad shape already, but we decided to sneak in and shoot him again. Before we even got there, he bedded down, tried getting up, and fell over again.

I snuck into 52 yards broadside and put another one in him right behind the shoulder, double lunging him. He ran 100 yards and stopped in some grass. We followed quickly and got to 50 yards again, but he just wasn’t going to go down without a fight. I decided to shoot him again.

Putting down the buffalo as fast as possible is always the goal, so I drew my bow and shot him again with the perfect top of the heart, double-lung hit. He didn’t even flinch. He walked another 20 yards and death bellowed while standing up. He literally died while standing on his feet.

All three of my shots were perfect. This goes to show how tough these animals are. Be on the lookout for our African safari videos on the Bowmar Bowhunting YouTube channel.