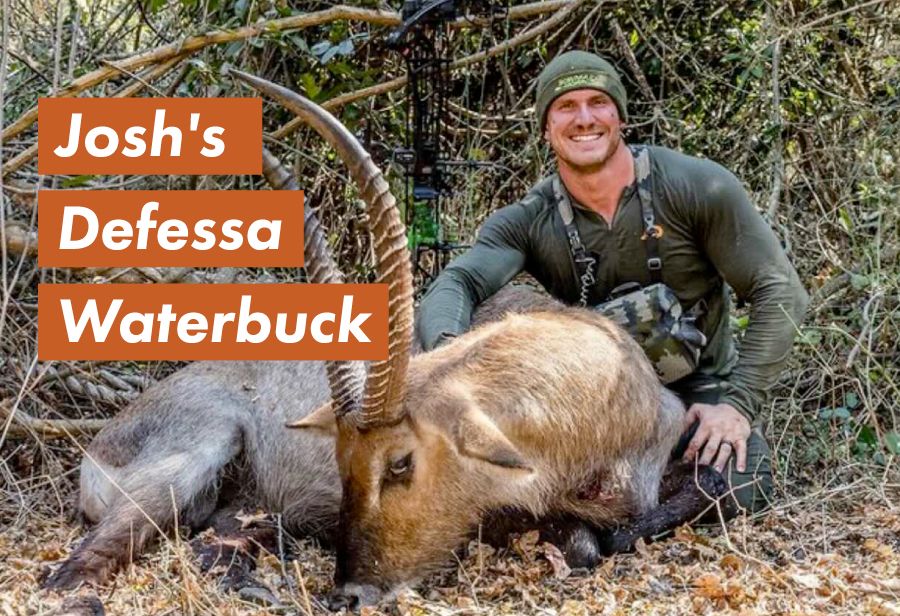 I am here today with another epic African safari success story. I killed a giant Defassa Waterbuck. At this point in my trip, I had been trying for weeks to get one of these beasts, and we kept striking out. We finally caught a break seeing this giant by himself.

We stalked in front of where he was going and waiting for him. Sure enough, he came walking by at 82 yards and as I drew back, he caught movement. We were in the shade and kneeling, so he didn’t know what we were. As I was aiming, I couldn’t believe I finally had my opportunity.

I focused hard, anchored my Bowmar Archery nose button to the tip of my nose, and took the shot. I hit him perfectly left and right, but just a tick low. We were worried about the shot until we saw the blood. We knew he couldn’t have made it very far, because we were positive I hit the lungs.

To our shock, he went further than we thought, but I still found him! This beast had freaky mass measuring in at 9 inches at his bases. His length was impressive as well. It measured in just over 27 inches, putting him as one of the largest Defassa Waterbuck killed in Tanzania with a bow.

All free-ranging, all wild and I am so proud to share these photos with you! Waterbuck tastes great! Be sure to follow along on the Bowmar Bowhunting YouTube channel. We will be cranking out videos from Africa really soon!